A COVID-19 patient who spent the longest amount of time on a hospital’s Integrated Critical Care Unit (ICCU) since the outbreak of Coronavirus has begun the next stage of his recovery.

Ray Connor, from Peterlee, spent 73 days in the unit at Sunderland Royal Hospital after he was moved into its care on January 10, a week after he was admitted as he struggled to breathe.

During his time on the unit, he was ventilated, had a series of infections and suffered multi-organ failure, with a dialysis machine used to take over the work of his kidneys.

The 67-year-old’s family were called in three times to say goodbye when it was feared he would not survive.

Thanks to the support of the ICCU team, his condition improved enough for him to move onto a ward, where South Tyneside and Sunderland NHS Foundation Trust’s Rehabilitation after Critical Illness (RaCI) team supported him as he started to recover.

After he was brought out of a two-month coma, he was wheeled outside so he could see his cavapoo Cobi, while he was also reunited with his five children and five grandchildren, including Zak Pearson, who was born just two months before he became unwell.

A chippy tea was brought in especially by staff as he started to regain his appetite, while a nurse took time to give him a haircut to make him feel smart again. 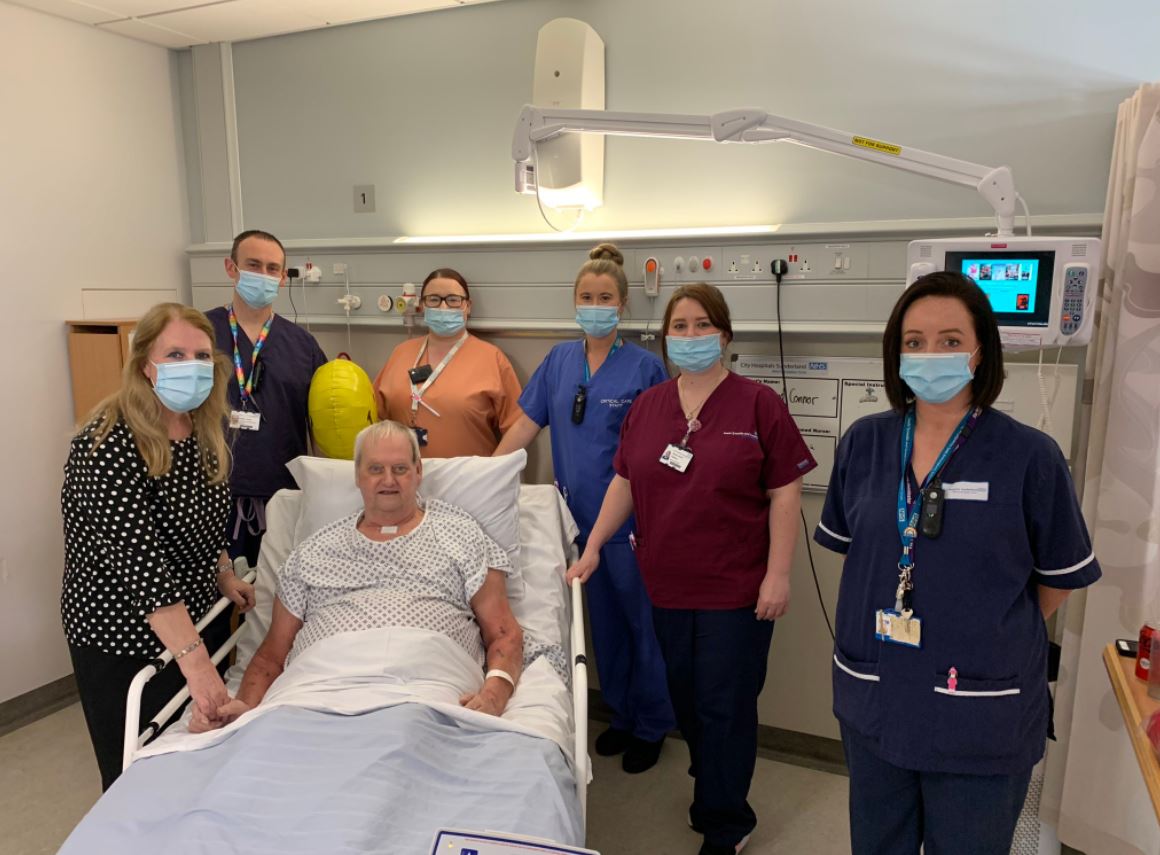 He has recently moved from the hospital to a care home where his rehabilitation is continuing as he works towards heading home.

Before he fell ill over the festive period, Ray, a former lifeguard who worked at Peterlee Leisure Centre for 40 years, felt well and swam a mile three times a week before lockdowns closed pools.

While Ray’s progress is being celebrated by the Trust, its leaders are mindful that while communities are now learning to live with the virus, the pandemic is not over and people should get their vaccinations as the best form of protection against the illness.

Ray, who lives with wife Marjorie, 65, and daughter Caitlin, 22, said: “When I got in the ambulance, I thought I would be in hospital for a couple of days and I was anxious to get home, but I never expected what happened.

“When I woke up two-months later from a coma, I just felt as though I’d been asleep overnight.

“My wife has gone through hell with all the trauma, as well as all my family.

“It was the right time to leave ICCU to start my rehab and get myself home.

“It was like one big happy family on the unit. It’s not just been the doctors and nurses who looked after me but every single person who works on that ward has played a part, it’s off the scale the dedication they show.”

Marjorie, who works as a supervisor assistant at St Bede’s Catholic School and Byron Sixth Form College in Peterlee, said: “I cannot thank the hospital staff enough for what they have done, it’s just fantastic and they have been like a family to us.

“It has been hard, but I was still going to work and my work friends have been brilliant.

“They cried with me and kept me going, otherwise I don’t think I could have coped, they have really been there for me.”

Dr Pete Hersey is among the staff who helped care for Ray on ICCU.

He said: “Ray has had a stormy journey and there were several times when we didn’t think he would survive.

“He saw moving to the ward as a very positive step and as a team, we were really pleased to see him make that progress.

“He was in really good spirits and it was remarkable to see him singing to the staff.

“It has very much been a team effort and yes, there have been doctors and nurses involved, but there are also physios, the RaCI team, dieticians, a whole host of people have helped care for him, and we’re all very pleased to see him start to recover.”

The Trust encourages people to get their COVID-19 vaccinations, with details on how to book a jab available via https://www.nhs.uk/conditions/coronavirus-covid-19/coronavirus-vaccination/