A woman who has devoted her career and retirement to the NHS has marked her 90th birthday with the help of the hospital who saved her life from COVID.

Margaret Donaldson is a volunteer greeter at South Tyneside District Hospital’s outpatients department, having worked for the Trust for almost 40 years as a receptionist and in the records department.

In the first wave of the pandemic, she became seriously ill and was treated by the very hospital she supports, spending 10 days in its care following her collapse at her home in South Shields.

Now Margaret’s milestone year has been marked by South Tyneside and Sunderland NHS Foundation Trust with a socially distanced presentation. 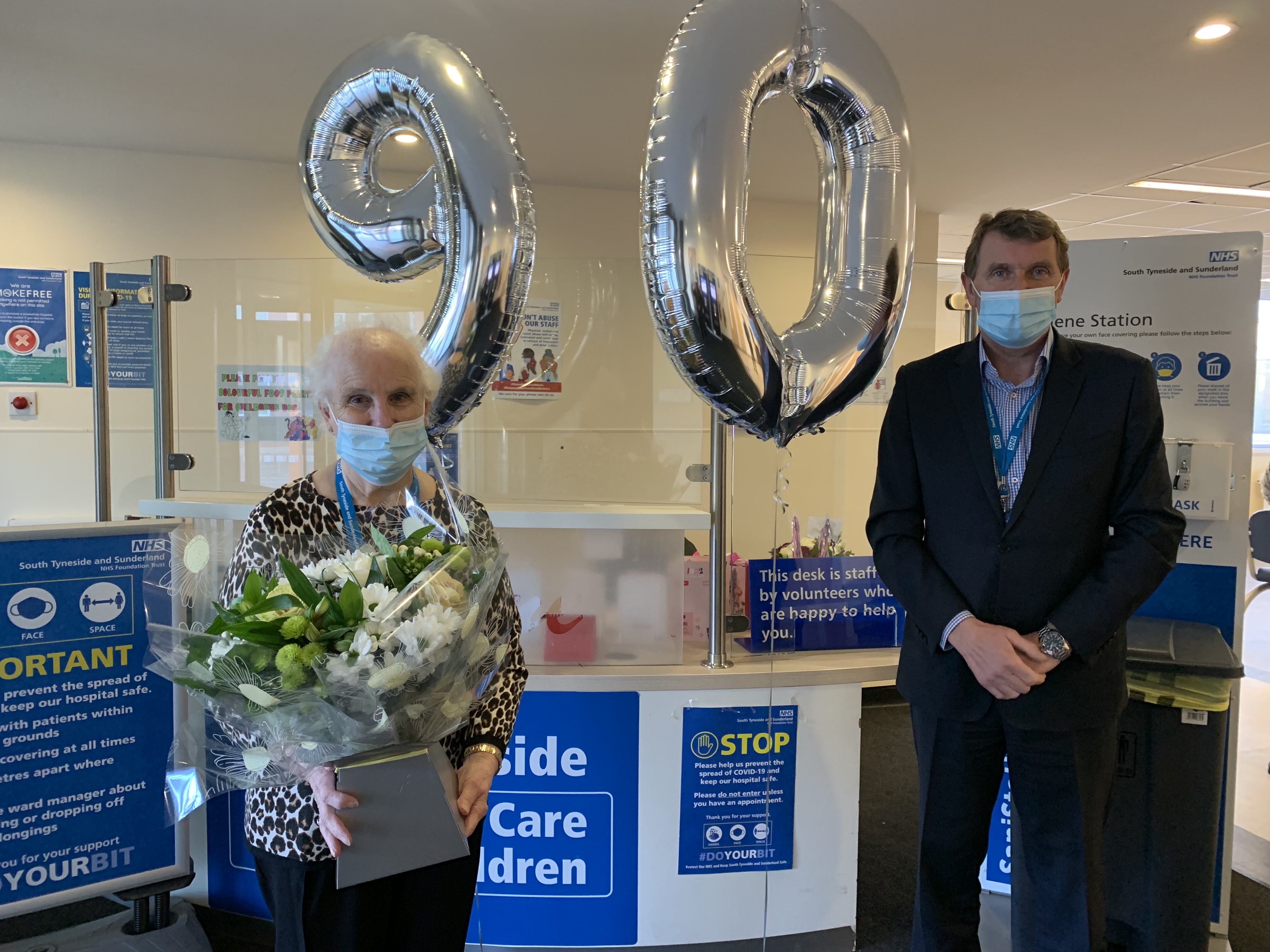 Ken said: “I’m delighted to have the opportunity to recognise the dedication Margaret has shown South Tyneside District Hospital and the Trust throughout her many years of service and to celebrate such a milestone birthday.

“Our volunteers do a fantastic job supporting our patients and staff and I am extremely grateful that we still have Margaret’s knowledge and experience to call on. On behalf of all her colleagues and friends at the Trust, I wish her a very happy birthday.”

Margaret’s time with the NHS began as a 16-year-old when she worked on the switchboard at the Ingham Infirmary in Westoe, before she moved into a role with its records department.

She then took a break aged 24 after she got married to Tommy and became a mother, but a knock on her front door from a hospital manager led to her return, working in the hospital’s Diagnostic Centre.

Margaret retired at 65 after her husband had a stroke, caring for him until he passed away 12 years later.

She first worked as a volunteer in the hospital shop before focusing her efforts greeting patients one day a week in the outpatients department.

Margaret, who turned 90 on Wednesday, January 19, said: “Being a volunteer keeps me occupied and it is lovely to see other people and help them out.

“I think being busy keeps you going.

“I have seen some changes over the years, and I loved working here and love being a volunteer.”

Margaret is mum to Linda, 66, who spent 40 years working at the hospital and has since retired as medical personnel manager, which saw her work with her mother for a short while, while son Geoffrey, 63, is an electrical engineer.

Margaret spent two months living with her daughter and son-in-law Michael after she became ill with COVID-19 and was supported by her wider family as she recovered and regained her independence.

Linda thanked the hospital for organising the presentation and said: “We are incredibly proud of her and it is fantastic she is still volunteering.  She was very desperately poorly with COVID-19 two years ago and spent time in hospital and we feel so lucky and thankful to still have her.”

Margaret has a host of birthday celebrations planned, from a meal out with her friends to a family party.