Hospitals get ready to celebrate the Queen’s Platinum Jubilee

Our Chief Executive Ken Bremner MBE has recalled his memories of a visit from the Queen as our hospital Trust prepares to mark her Platinum Jubilee.

South Tyneside and Sunderland NHS Foundation Trust has a host of plans in place to acknowledge the monarch’s milestone.

Babies delivered by Trust midwives during the Bank Holiday will be presented with a commemorative coin and a baby grow to mark their extra special arrival, while in anticipation of the weekend, staff have dressed up areas away from treatment spaces with red, white and blue-themed decorations.

Catering teams have sweet and savoury treats lined up for patients staying on its wards, with free access to the hospital television and radio systems arranged over the four days.

Sunderland Royal Hospital and South Tyneside District Hospital restaurants, which are now open to visitors again, will also serve up special menus in the lead up to the event.

At Haven Court in South Shields, a subsidiary of the Trust, staff and residents will celebrate with a 'Street Party' and entertainment on Sunday.

Each resident at Haven Court will also receive a souvenir coaster and Jubilee chocolates.

Sunderland’s hospital was gifted its regal name in 1996 after its leaders called on the Government to allow the city to retain the title bestowed on Sunderland Royal Infirmary when it closed.

Trust Chief Executive Ken Bremner MBE was deputy CEO and Director of Finance in December 2000 when the Queen visited to officially open the Chester Wing of Sunderland Royal Hospital. 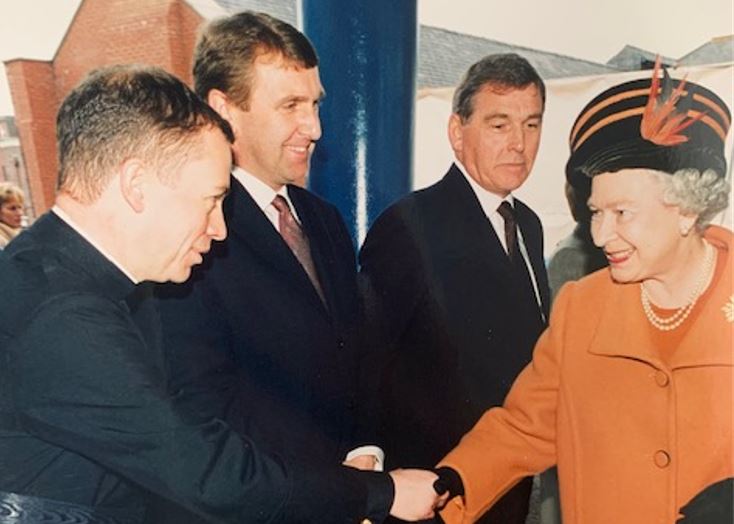 The Monarch was accompanied by the late Sir Ralph Carr-Ellison, Lord Lieutenant, who was instrumental in arranging the visit as his last official act before his retirement.

Mr Bremner said: “We are delighted to be marking the Queen’s Platinum Jubilee and that is reflected in all our celebratory touches across the Trust.

“The day the Queen visited us in 2000 was a fantastic one and I can remember her route from Chester Road being lined with children from nearby schools waving flags as she arrived.

“I was among those to greet her at what is now the out-patient entrance, along with the then Chairman and CEO of the Trust.

“My specific role that day was to ensure a party of dignitaries were taken on a brief tour of the new wing and I was under very strict instructions to ensure they were back in the room where Her Majesty was due to sign the visitors' book well before she actually arrived!

“As a consequence, the dignitaries with me had one of the quickest tours ever of the new Chester Wing.

“It was a pleasure to meet Her Majesty and the memory will stay with me forever.

“It is wonderful to look back on this occasion as we celebrate another milestone in her reign.”

Other visits to the Trust from the Royal Family include one from Princess Anne, who officially opened Palmer Community Hospital in Jarrow in June 1987, a year after it welcomed is first patients.

In 2012, the year of the Queen’s Diamond Jubilee, the Duke of Kent visited Sunderland to open the Jubilee Wing, while the milestone itself was marked with special cakes delivered to all its wards and every baby born on the official date given a commemorative piece of glass.