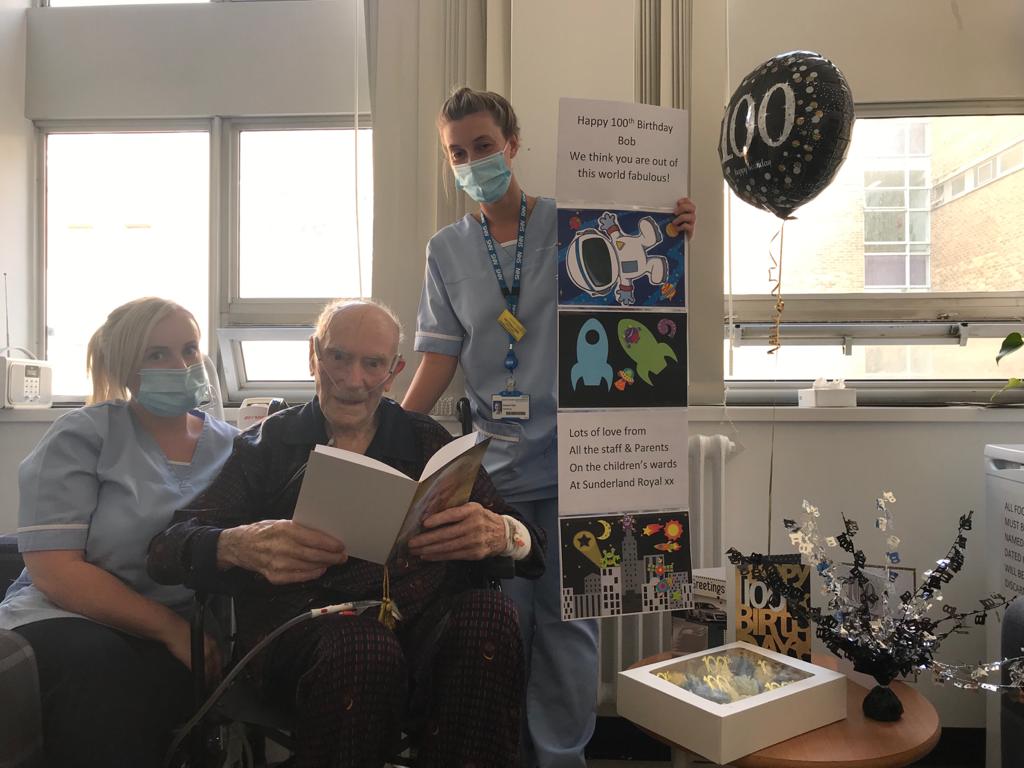 A patient’s 100th birthday was celebrated with song and special decorations thanks to a team of nurses who ensured he had a day to remember.

Eagle eyed staff nurse Kayleigh Wilkinson spotted Bob Liddell’s milestone day was approaching from his notes and made plans with her colleagues to mark the date.

Bob, who served in the Royal Artillery before going to work in a host of jobs including a cinema operator, bus driver and then tanker driver and office manager for BP, is recovering from surgery on D43 in Sunderland Royal Hospital after fracturing his hip in a fall.

The nursing staff put up banners, balloons and other decorations, while specially decorated cup cakes were made by a staff member and another treat from catering were lined up.

Cards from the ward joined one from the Queen, with the ward putting together gifts including pyjamas and toiletries to make his day extra special.

Youngsters staying on the hospital’s children’s ward also sent him a card along with their best wishes.

Bob, who is dad to Mandy Smith, 67, and Bob, 76, had been due to celebrate becoming a centenarian with a family party in a marquee in Cockermouth, where his son lives, with his loved ones expressing their gratitude to the team for going the extra mile following his fall.

Bob – who believes the secret to a long life is an egg a day, lots of milk and no smoking or alcohol – said he was “overwhelmed” and “amazed” by the efforts of the staff.

Mandy added: “It’s been marvellous, we never dreamt they would do any of these things. We are really grateful. All of the family and friends have been sending messages and videos along with the cards and presents.”

Kayleigh said: “He came in with a broken hip around a week ago and has been to theatre for surgery and we’ve been working with him on his physio. We realised it would be his birthday when I looked at his date of birth.

“We got him some pyjamas and toiletries and we brought in some balloons and got some banners up. We wanted to make it special for him – you only turn 100 once. His family came in with his card from the Queen and we all went to his bedside so he could open his presents and sang happy birthday to him. He said he didn’t know we were going to do it and told us it was so nice.”